A haven of peace in a fast-paced environment set within a grandiose décor, honouring Thai craftsmanship tradition in a vibrant design orchestrated by world-renowned Jouin Manku agency. 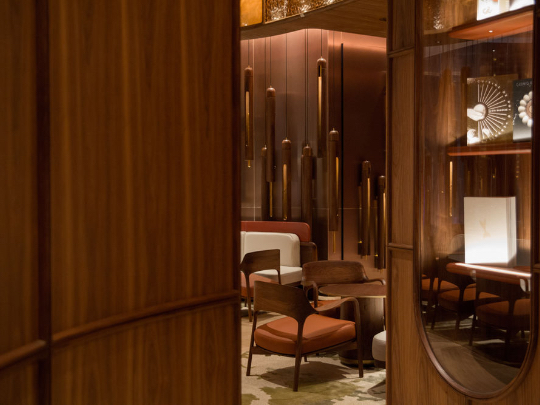 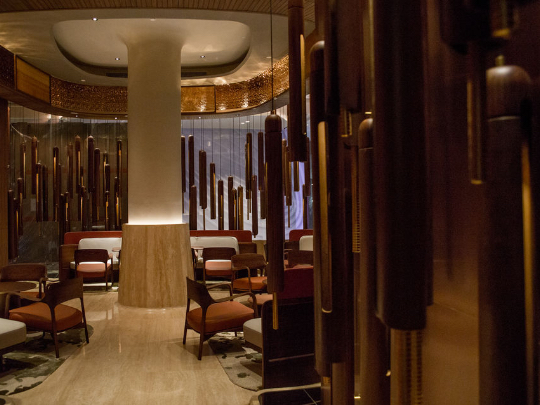 Patrons arrive through a welcoming wood-panelled foyer, and see ahead a lounge surrounded by walnut and brass lamps that spark your curiosity to discover what is beyond. The lounge is a space of seclusion and privacy that has been inspired by the intimate gardens – the ‘bosquets’ – of the Chateau de Versailles. The lounge, which seats 24 people, is open every day, from 12:00 midday, offering patrons drinks and snacks all day.

Blue’s interior decoration is a sensory delight and is a part of Chef Alain Ducasse’s belief in a total experience being created for patrons. Designed by Jouin Manku – a Parisian spatial design studio led by French designer Patrick Jouin and Canadian architect Sanjit Manku who have designed all of Alain Ducasse’s 3 Michelin star restaurants – Blue is a sumptuous but still informal setting where blues, golds, creams, and natural wood dominate the palette, putting patrons at ease and enveloping them in comfort. Guests are welcomed into a wood-panelled foyer and then pass into a lounge inspired by the intimate gardens of the Chateau de Versailles, encircled by a wall of walnut and brass lamps. The restaurant lies beyond, under an extraordinary chandelier that sparkles among pleated textures, with luxurious royal blue walls and an expanse of floor-to-ceiling views across the city. 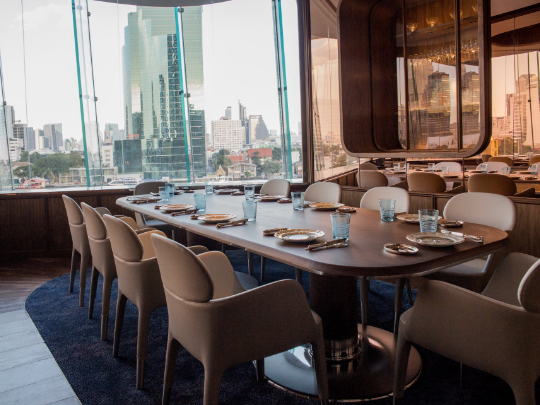 The main dining area is complimented by two private dining rooms, both offering magnificent views of the river and the utmost discretion. The first can accommodate up to 8 people and the second one up to 10 people. Should you require further information, kindly get in touch with our restaurant team.

Chef Wilfrid Hocquet comes with experience from one of the world’s greatest Michelin starred restaurants – the 3 Michelin star ‘Le Louis XV by Alain Ducasse in Hôtel de Paris Monte-Carlo – and having spent most of his 20-year career in Michelin starred restaurants throughout France, United States and Thailand. Wilfrid was born in South of France, where he graduated from culinary school. Since then, he has worked under the tutelage of some of the most renowned chefs around theworld, including the acclaimed Alain Ducasse, Daniel Boulud and J&L Pourcel. Today, Chef Wilfrid Hocquet moves back to Thailand, to join Alain Ducasse’s new Bangkok restaurant, Blue by Alain Ducasse at ICONSIAM, as Executive Chef.

Alex Cufley was born in South-East England, where he completed his studies in International Hospitality Management before joining the team of Ducasse Paris at Rivea London at the Bulgari Hotel in 2012. He then moved to Hong Kong to join Rech by Alain Ducasse at the Intercontinental, winning one Michelin star in the first year. Following a short journey to Macau to open Alain Ducasse at Morpheus as Restaurant Manager, which was awarded 2 Michelin stars in only its first year, and after short stints in Paris and Tokyo, Alex then arrived in Bangkok to join the team of Blue by Alain Ducasse as Restaurant General Manager. According to Mr. Cufley, Blue embraces all demographics, “from locals to tourists, the older and the younger, but all of whom will have a common desire to experience a very special sense of exclusivity and enjoy the finest in dining in a relaxed environment that will make family and friends feel at ease.”

Born in Lens, in the north of France, Executive sous chef Valentin Fouache was introduced to the culinary world at a young age by his chef father. Later, he followed in his father’s footsteps, studying Culinary Arts at the prestigious Lycee Hotelier de Touquet. After graduating, he began his professional career as a Commis II at Restaurant Alexandre, a two Michelin-star restaurant in Nimes. From there, he moved to Eze to work at the historic Château De La Chèvre D’Or in their two-Michelin-starred restaurant by the same name. He worked alongside Chef Arnaud Faye, who was awarded a ‘Meilleur Ouvrier de France’, a title honouring the best craftsmen in France. Then, after a two-year stint as sous chef, he moved to Bangkok. He brings 10 years of work experience in some of the best kitchens in France to his role as Executive Sous Chef at Blue by Alain Ducasse

With an international hospitality career spanning over fourteen years, Morgan has now joined the team of Blue by Alain Ducasse as Head Sommelier & Assistant General Manager. Born in Monaco, Morgan started his hospitality career at the age of fourteen, working summers in Monaco’s famous late night bistro, The Tip Top, where he developed a passion for hospitality which continues to this day. Building on these his first working experiences, Morgan enrolled in a hospitality school in Nice and then pursued his professional career with a move to London at the age of 17. Whilst working for the Galvin brothers in the Michelin starred Galvin la Chapelle, Morgan first developed his interest and love of wines. Morgan is a familiar face to many wine lovers in Bangkok having spent eighteen months with the teams of the Lebua hotel working at both Mezzaluna and Chef’s Table as Head Sommelier. Now Morgan has joined the team of Blue by Alain Ducasse as Head Sommelier and Assistant General Manager. 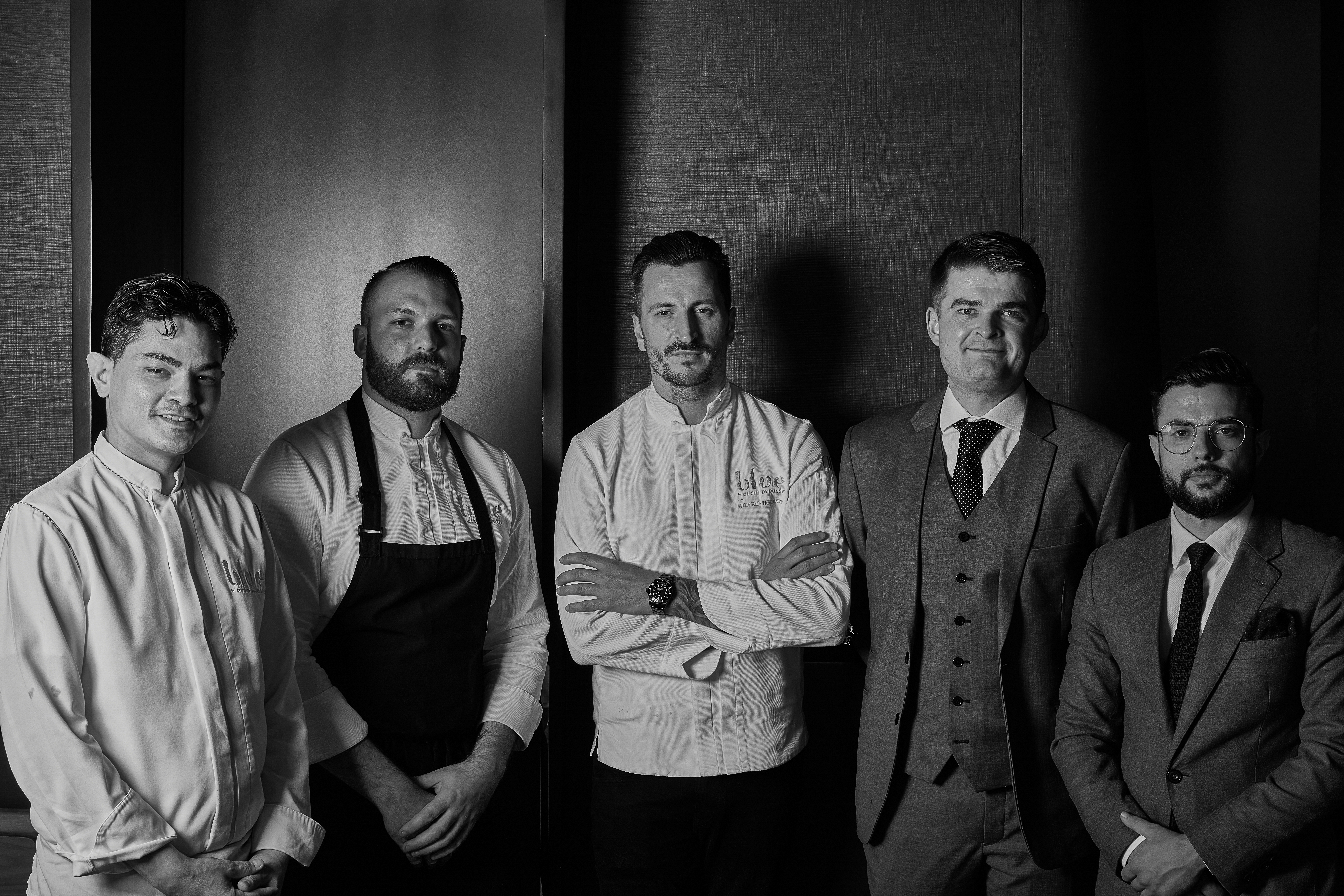